This page may be public, but you're NOT allowed to work on the canon FNaF characters without my permission. This doesn't include presets that include the characters, however, or grammatical corrections.

One Night of Everything: Ultimate Custom Night

After William Afton beat 50/20 mode in the Ultimate Custom Night, Satan decided to send him here, to prove his skill and just for the devil's entertainment.

The location is a mish-mash of all the Five Nights locations bundled into one, perfect for all the animatronics. 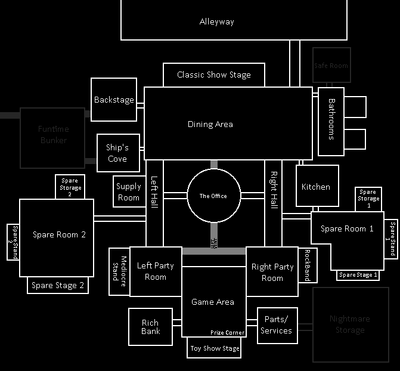 TJOC (The Joy of Creation)

One Night with a Box

CJCreations's All Stars (Will add more)

Five Nights with The Banana Splits

More will be coming after FNwTBS5 is complete.

Jester: first appears in the 90's area, wanders around in an attempt to reach you... clumsy and may go to the wrong rooms, sound can attract him

Rally: first appears in the 90's area, can be seen crawling into one of the 90's vents, acts the same, but when 90 vents doors are closed on her, she goes back to the 90's area.

Ally: Acts similar to Jester, but won't get lost, is faster, and can get even faster the more power is in use.

Rabbit of the shadows: Will randomly appear in the office, quickly put the monitor up before he creates his arms.

You may only select a maximum of 25 characters and their AI can be customized from 0 to 20, like in Five Nights at Freddy's 1 and 2. The preset mechanic returns from Five Nights at Freddy's 2 and Sister Location too. After completing a night, your rewarded money depending on the added total of all the animatronics AI. For example, stand-alone Freddy on 20 will give you $20. All of the FNaF1 cast on 20 will give you $120. This money can be used in the shops.

IDK why these guys are here, but they are

Vent above the office

Unlocked when you purchase Yoshi from the Animatronic Lab. Purchasable for $1991reset

The Animatronic Lab is basicly a way to unlock new animatronics.

FNaFSL Custom Night animatronics. Salvage What You Can.

Trash and the Gang and Mediocre Melodies. Finest Quality

Rockstars Assemble and Posh Pizzeria. Back to the 90's

All Incarnations of Freddy/Fredbear Down the Rabbit Hole

All Incarnations of Bonnie/Springtrap Chicken Run

All Incarnations of Chica. Foxy Foxy

All of these are experiments made by William Afton, like the Nightmares and some of my/others OC's. The Forgotten Ones

The Five Nights At Creepsters creatures from All Stars wrapped up in one preset! Chaotic Challenge

The Five Nights At Hansen Enemies from All Stars are present in this Preset! Class Attack

Endothony, W.I.P and Brain Freeze appear to scare in this Preset Ready for the Innovation?

All of the Discarded Creatures'. Five Rights

The entire cast of 'Five Rights of Jeffys'!'. A Random Jumble!

The Entire Cast from 'One Week of Randomness', as well as the Player Character from 'DSAF: Sister Location'. Johto Fun

The Player Characters and Rival of the videogames Pokemon GSC and HGSS. Ranger Danger

All Player Characters from the Pokemon Ranger Trilogy. Children of Freddy's!

The Animatronics from Five nights at X! Weirdos

A Reference to the preset in Sister Location. If You Survive We’ll Give you Cake!

All Characters from Five Nights at Zombies. Cman’s Psychos!

Cman’s favorite characters and made up characters, and characters he made up himself. Cupcake Challenge

A Reference to the preset in FNaF2. Fazbear Fever

Reference to the preset in FNaF2. Golden Freddy

Unlocked by finding the key and turning on the destroyed Dee Dee's Fishing World arcade machine. Can only be done on 20/20, and restarts your night when activated.

welcome to my special hell.

Main problems are Springtrap, Freddy Frostbear, Dawko, and, despite being slow, Tabby Slime. Beating this challenge and "Cry" unlocks Boofie Sound Box item in the the shop for free. Cry

Only unlocked when you buy Yoshi, Unikitty and Tails from the Animatronic LabNew and Deadly 2

Good Night is only unlocked upon surviving for a minute on Impossible-er-er Difficulty.

Retrieved from "https://five-nights-at-freddys-fanon.fandom.com/wiki/One_Night_of_Everything:_Ultimate_Custom_Night?oldid=212989"
Community content is available under CC-BY-SA unless otherwise noted.