This aritice is about the original version of Spam. If you want the 2.0 version, see here.

"Well, it's not stealing if they're dead..."
―Spam the Puppet

Spam is an animatronic performing at Freddy Fazbear's Pizzeria. His occupation is a party room entertainer obsessed with masks. He prefers to either borrow a mask and give it back, or take it off of a dead person's hands. Commonly he tends to mumble about things in the corners of his eyes. As an Or Pyx, he is called Spasky.

Spam is a thin, black animatronic, with nine gray stripes down his torso. He has a spring for a lower torso. His arms are thin and gray, with four red stripes on each. He has a red bowtie, and is wearing a mask. There are four fingers on each of his hands, each with a black stripe around it.

As Spasky he wears a large jacket over his normal skinny self.

Spam likes making friends, mask-less or not. He has a cheerful personality, but he will take someone's mask once they are dead. He hopes to make lots of friends. Spam was one of Phobe's messegers in its Animatronic Kingdom, but he was removed from his status for a short period once Phobe found out he was a prince from the Mask Kingdom.

He has another personality as an Or Pyx. Spasky is completely insane, actively affecting nearby animatronics with static. In this form, Spam has somewhat lost interest in masks, but would still mention them.

Spam started his living when he was the second child of his parents, Swan and The Puppet Queen. Growing up in a happy environment, served excellently by ninjas, having a good time. However, Spam developed a hobby of collecting masks, which in a kingdom full of mask wearing people, could be problematic. But whatever, the masks smiths made him as much as precious masks as he wanted. But other tidings were to come.

The High Priest of Karthism, Phobe, was deciding to abandon his role. Giving that role to Spam's lost older brother, Qeety, Phobe left, forming his own kingdom, the Animatronic Kingdom. Later, when that kingdom became successful, Spam left the Mask Kingdom to join them, in order to see the outside world better.

Haruki and Spam are best friends.

They are friends, but they compete about their mask collecting way too often.

Spam starts out in Party Room 4. He moves to the Main Hall, in your camera's blind spot. If another animatronic attacks you because of Spam stealing your mask, instead of the normal jumpscare, Spam will push them out of the way and kill you.

Spam is very active through the nights. He will rush to your office unexpectantly. Spam can steal your Freddy mask when you looking at the monitors, so flash your light to stun him. If Spam steals your Freddy mask, you are unable to use it, indicated by the x on the icon. If you shine your light down the Main Hall when this happens, Spam will be running away in the Main Hall wearing your mask.

Games They Appear In

All your mask are belong to us. 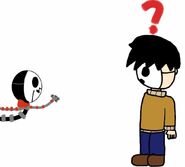 Kid's "My Day" drawing of Spam by Randomz.

Spam at Wolfy's Funeral by Randomz. (Note that he is wearing another mask.)

Pixelated Withered Spam, deactivated.
Add a photo to this gallery

Retrieved from "https://five-nights-at-freddys-fanon.fandom.com/wiki/Spam?oldid=199383"
Community content is available under CC-BY-SA unless otherwise noted.