WARNING: There are deadly amounts of cringe featured in this profile. Please proceed with caution.

you are new, please note that you shouldn't rely on this information for info about me. This is very old, and I will rewrite it when I have time.

why must you do this to me

Wow. You seem to have found my profile page. Come inside... and get comfy, because it costs $80 to leave. NOW PAY UP!

Okay, you can pay later. Anyways, I am SpringThing14! I am for the most part always active, and am proud to be a part of this wiki! I have been here since September 22nd, 2015, and am still active now!

Also, every Thursday, I'll make a news blog called SpringThing Weekly! I insist you check it out so you can stay updated on my content.

Some of my Sayings

Pretty much all users are at least a little bit of a wiki friend, as long as they aren't insanely rude.

If something is red, it means that game/story is coming soon.

Five Nights at Frisky's 6:The Finale

Regret it or Not 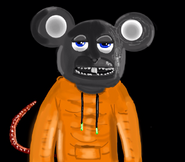 Add a photo to this gallery
Retrieved from "https://five-nights-at-freddys-fanon.fandom.com/wiki/User:SpringThing14?oldid=201230"
Community content is available under CC-BY-SA unless otherwise noted.

Ranked #5
on this wiki